Momentum is a thematic network partially funded by the European Commission under the ICT Policy Support Programme (ICT PSP) as part of the Competitiveness and Innovation Framework Programme (CIP).

First introduced in 2006, the Stroke Angel’s purpose is to shorten the time required for the entire process chain from finding and diagnosing the stroke victim to the patient’s admission and treatment in a hospital. Typically, the main problem in stroke care is insufficient communication between EMS and hospitals. Critical time is lost when the patient is not transported to an appropriate hospital immediately (for example, one that continuously operates a computer tomo­graphy [CT] scanner) or when hos­pitals are not prepared for the patient’s arrival. Therefore, the chief purpose was to meet the short timeframe in which stroke patients can be treated by thrombolytic therapy. The first three hours after a stroke are crucial for a successful therapy and the patient’s sub­sequent quality of life. 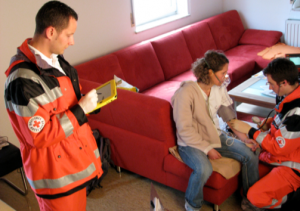 The Stroke Angel system consists of a Handheld-PC connected to a patient card reader that records the patient’s personal and insur­ance data and communicates with a mobile phone via Bluetooth. The Paramed­ics use Stroke Angel along with conventional medical devices, such as electrocar­diographs. Stroke Angel device supports stroke diagnosis with the help of a structured checklist: the para­medic checks and en­ters various indicators of neurological prob­lems, such as delayed speech or movement, guided by the system. Based on this data, the system calculates the likelihood of a stroke. If a stroke is suspected, the system initiates an alert and recommends the patient’s immediate admission to a specialized hospital and sends all relevant data to the hospital via wireless network technologies (Gen­eral Packet Radio Service/Universal Mobile Telecommunications System) including the emergency protocol. Secure Sockets Layer (SSL) encryption secures data transmission through both cli­ent and server authentication. According to one paramedic, “More and more patients survive the stroke and suffer less from disablements.” (Uwe Kippnich)

When the new patient data is received at the hospital, the Stroke Angel server trig­gers an alert, which initiates all necessary pre­parations for stroke treat­ment while the patient is still en route. The system automatically files a new electronic patient record in the hospital information system on the basis of the incoming Stroke Angel patient data and after confirmation by reception.

“At around 3am, I woke up feeling a desire to void my bladder. When I sat up, I immediately noticed several impairments: I was suffering from rotatory vertigo and speech disturbance. In addition, my right hand did not function properly and I could not stand on my right leg. My wife recognized the symptoms immediately, as a similar case had occurred in the family previously. An emergency call was made straight away.

The EMS, including an emergency physician, was on the spot within ten to twelve minutes. The emergency physician performed the primary medical treatment and administered care in the ambulance. The ride to the, a distance of about 34 km, was very quick, as the ambulance was driving with flashing blue light and siren. At the time of my arrival at Neurological Hospital in Bad Neustadt, the hospital staff was ready at the emergency room and they administered a CT immediately.

The entire procedure from the EMS to the hospital ran smoothly. Within a few minutes, I was getting a continuous intravenous drip infusion, which probably saved me from the severe consequences a stroke can have. I am very happy that everything worked out well for me, and I am convinced that the fast communication between the EMS and the hospital improved my chances a lot. And while I did not notice anything of the actual process and the application of the Stroke Angel technique in this situation, it was wonderful to know that behind the curtain everything was running smoothly thanks to telemedicine.”

The time needed to com­plete the first diagnosis at the scene or in the ambulance slightly increased because the para­medics seemed to need more time to enter the data. However, time is saved through the development of a number of new solutions. The Stroke Angel has made inroads by ensuring patients are transported directly to specialized hospitals without detours to other hospitals. And it has also improved the hospitals’ decision-making procedures, pa­tient registration, and preparation of the neurological unit – in particular, by starting the CT scanner before the pa­tient arrived. As a result of this, “time-to-imaging” (from entering the hospital to brain imaging) has decreased by 30%. The medical staff in­volved considers these medical benefits as the most positive. “The earlier the diagnosis is made and therapy is started, the less is the middle and long-term disablement that remains. This is positive not only for the patient and his or her relatives but also for society as younger people can go back to work earlier and the elderly are less in need for care and help.” (Marion Gottwalt, leader social services) This positive feedback by the medical staff was a main factor helping with the introduction of Stroke Angel to routine use. In 2011, the reengineered system was in use in 40 ambulances and one emergency rescue helicopter in eight regions of Germany. Further regions are planning to introduce the systems in the future as well.

Although the preclinical time has changed significantly, the intersectional information transfer induces a clinical time reduction of around 50%. Until September 2010, the preclinical time as well as the time from admission in the hospital to the interpretation of the CT images (so called door-to-Imaging) kept constant. However, the clinical time from the entrance at hospital to the performance of lysis therapy could be reduced to less than the 30 minutes previously needed. This is quite significant, comparing to a mean of more than 60 minutes prior to the introduction in 2005. In the preclinical rescue phase, the maintenance of the time needed is due to the fact that the EMS first needs more time to insert all important data (something that before was done after the patient’s handover at hospital). Due to early information transfer during transportation, the personnel in the hospital are already prepared at the time of arrival. Therefore, a CT scan can be performed immediately on the patient who is suspected of having had stroke, consequently allowing lysis therapy to be performed earlier. “Stroke Angel supports the communication between the different divisions. With the help of scientific support and transparence, the acceptance of the processes could be increased.” (Prof. Dr. Bernd Griewing)

There have been pros and cons to this novel treatment system. The people using the system expected a reduction of the time needed for medical care of stroke patients altogether and considered the Stroke Angel checklist a helpful support when making a diagnosis on the ambulance. Respondents to a questionnaire appreciated that recording via Handheld-PCs helped facilitate their work. Another positive observation was implementing a standardized procedure resulting in a complete documentation of the operation. However, the additional expenditure of time for the input of data into the Handheld-PCs was noticed as negative. This was traced back to the fact that inputting data was very difficult while the ambulance moved due to the small screen and the imprecise manipulation with the electronic pen as an interface device. With the introduction of bigger displays on the Handheld-PCs, this problem was addressed and ultimately solved.

The economics of the Telehealth device

There are several positive economic effects for society as well as for hospitals and patients that are due to telemedicine. For society, each patient with an ischemic stroke that is treated with a lysis therapy leads to a remarkable reduction of costs for rehabilitation and follow-up care. A Canadian study shows that an increase of the lysis rate by 10% reduces costs by 3.8 Mio CAN$ (YIP et al. 2008). Patients who are treated with lysis therapy can return to daily routine faster and their ability to work as well as their quality of life is maintained for longer.

Furthermore, for a hospital, there are several economic benefits. Due to advance announcement, the allocation of resources can be scheduled better and the whole process can be planned in line with the demands before the patient’s arrival. As a result, idle actions such as a long waiting time for the EMS can be avoided. Additionally, the patient’s data is electronically available in advance, allowing an early initiation of all administrative processes. Before the implementation of the Stroke Angel technique, all data of the patient (e.g. name, insurance data) had to be entered into the system by hand at a later stage. Usually, this saves about ten to 20 minutes for the post-processing of a rescue mission. However, the main economic component can be found in the patient management. Thanks to a close coordination with the EMS, it can be ensured that a stroke patient is transported to a stroke unit in any case and is not brought to an inappropriate hospital. Based on this analysis of data, the best possible capacity utilization of the stroke unit can be planned and implemented. An emergency case turns from an unpredictable disturbing factor into a process that can be smoothly integrated into daily clinical routine. “The project leads to a continuous observation of all processes in the medical care of stroke patients. As a consequence, the procedures in all participating divisions could be synchronized much better.” (Dr. Volker Ziegler)

For the EMS, the documentation is facilitated: when using telemedicine, they can assure that their services are documented correctly and are financed adequately. Moreover, the EMS personnel can leave the hospital faster and are available for further rescue missions earlier. For the professionalization of the EMS, it is important to apprehend it not as a transport organization but as a decisive link in the rescue chain and to highlight the relevance of the pre-clinical collaboration of the EMS and the hospital.