Momentum is a thematic network partially funded by the European Commission under the ICT Policy Support Programme (ICT PSP) as part of the Competitiveness and Innovation Framework Programme (CIP). 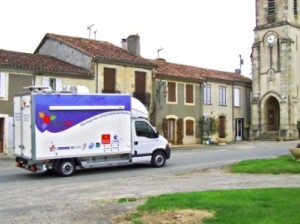 A Diabsat truck in rural France

Diabsat is a telemonitoring service for people with diabetes using mobile screening.  The aim is to improve medical monitoring of people with diabetes  near their home.  The service uses a mobile truck with medical equipment. It works primarily in rural areas with a dearth of health service providers so that the recommendations of the French Health Authority for annual screenings can be met.  In the short term the expected outcomes included tested and more robust technology and increased familiarity among people with diabetes and healthcare providers with the use and potential of remote monitoring.  In the future healthcare services may also be re-organised.  In the long term there is hope of a reduction in complications of patients experiencing diabetes as well as cost savings.  The main beneficiaries of the service are people with diabetes who live in rural areas who may be facing difficulties in identifying and consulting specialist physicians including diabetologists, podiatrists or ophthalmologists. 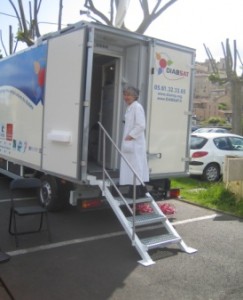 The target population is people with diabetes living in remote areas.  In France about 2.2 million people (four percent of the population) have been diagnosed with diabetes, of whom 92 percent are type 2 diabetic.  Of those, about 400,000 people are estimated to live in France’s rural areas: this is the number of eventual potential beneficiaries of the service.  Currently, the service is deployed in Midi-Pyrénées region in which the type 2 diabetic population is estimated to be 92,000. Other French regions are interested in developing this service on their area and partnerships are being built to transfer technology and know-how.

Nurses in a mobile truck tour rural France to perform screenings on selected patients. They enter the screening results in the patient record (including the fundus graph that shows the width of the retinal eye vessels, and the foot print graph). Then they transfer the data via satellite to a secure online data centre. From their offices, medical specialists (diabetologists, ophtalmologists and podiatrists) access and analyse the results and prepare a report online which contains their interpretation, diagnosis and care recommendations. The reports are mailed to the patients and their physicians. The service was initially made ​​available for diabetic patients informed by the mayor, pharmacy, their nurse or doctor in rural areas, as part of a broad campaign of communication. Thereafter, the service was requested by groups of physicians, multidisciplinary home health, nursing homes for patients in rural areas. A recent campaign was also conducted in some urban areas in precarious populations.

Set-up that was being replaced

The purpose of this service was not to replace a conventional treatment. Rather, it was to reinforce medical monitoring for people with diabetes by supporting general physicians in rural areas where the supply of medical specialists (especially diabetologists, ophtalmologists, podiatrists) is dwindling.  Patients face difficulties in seeing specialists at recommended annual intervals either because of long distances or waits for appointments. They may not be aware of the need for annual medical exams so as to avoid further complications in their diabetes.

Outcomes and results expected after introduction

The nurses welcome patients and interview them to collect administrative, socioeconomic and medical data. Then they ask the patients about their annual medical follow-up. If the patient had not had one or more of the recommended examinations, they perform the screening tests to detect ophthalmic or renal or neurological or foot infections which are specific to diabetes.

The retinograph collects images of fundus (the width of the retinal eye vessels), and a device for semi-quantitative measure of microalbuminuria detects  a loss in renal function . 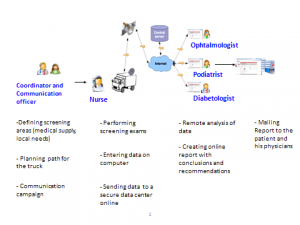 The service has been running for four years. The trial lasted from 2010 to 2011. Since 2012, this service has been funded by the regional network in diabetes care (DIAMIP) and by the University Hospital of Toulouse. We are still looking for sustainable funding to carry on the telemonitored screening campaigns. Partnerships have been launched in various regions of France and overseas departments (départements outre-mer) to deploy the service.